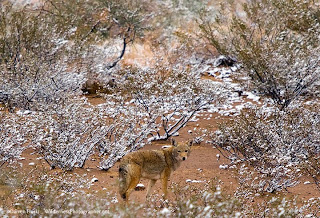 Snow in the Guadalupes s a treat. I wish I could say it was taken last week, but no......this was back at Halloween.

I was making my annual fall color trip and arrived in a snowstorm.

I was hoping to find El Cap showing but as I drove around the pass I found it in the clouds. I decided to drive down to the boulders and on the way a coyote ran in front of me. Luckily I had the 70-200 on and I was able to ease to a stop on the side of the road and get this one image. And then he was gone. 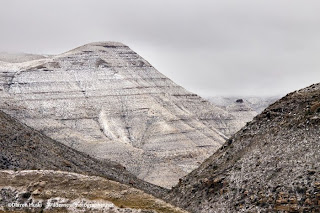 The snow stopped quickly and it was just enough to put some definition in the rock strata.

The higher peaks were in the clouds so I worked the hills and ridges. It was a lucky morning.
After a couple of hours working in the now melting snow, I realized that is was after 8am and that McKittrick Canyon was now open, so off for the fall color I went.
Labels: Guadalupes Snow Texas