The Best Fall Color in the West 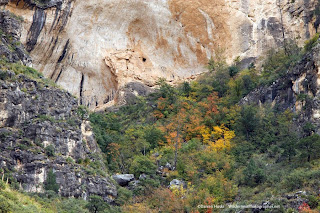 After enjoying the fleeting snow at dawn, I headed to McKittrick Canyon and the best fall color in the west.

One does not think of Texas as a fall color hot spot, but hidden in the desert canyons of the Guadalupe Mountains is the most vivid fall color in the west. The Guads are fairly unknown even in the national park circuit and in the Lone Star State but that makes going there all the better!
McKittrick Canyon is a magnificent place that for a few short weeks has vivid oranges, fiery reds, and bright yellows of maples that shine in a canyon of huge limestone walls.

As one drives across the flat barren desert of the Permian Basin you would hardly expect fall color but what a surprise it is. McKittrick Canyon has year round water and an ice age relic forest that includes maples that put on the vivid show.

By the time I'd made the hike into the canyon the snow was only a memory, but the cool temps remained. We lost the heavy overcast too and a windy day of moving clouds and partly clear set in. 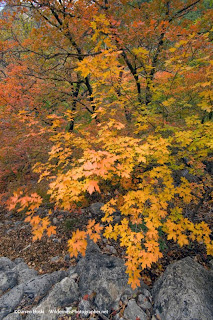 est fall color photography conditions. But it was a day in McKittrick!

I am always amazed at the huge canyon walls and the vivid color that clings to the narrow stream corridor or high on north facing canyon walls.

I walked and photographed the color here and there. I also realized that despite numerous trips here,I had never captured it in a way the fully shows the magic of this place. Looking over my images and even these here and I still think I am not doing anything close to the views it deserves.

So take a quick look at these poor attempts and multiply it ten times and then maybe you can realize how great a place this is.

Of course, images like this will not generate a stampede of other photographers, so in a selfish way its a good thing.
To see more on the Guadalupe Mountains, see the article I had published on Nature Photographers Network:
http://www.naturephotographers.net/articles0409/dh0409-1.html
Labels: Article Fall Color Guadalupes Texas