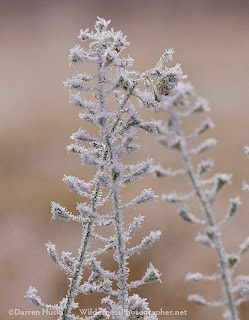 During the cold snap we got in the last week of January we had a couple of mornings of an ice fog. It was cold and frosty with a fog the left everything coated with ice crystals and in a low contrast haze.

I went for a walk with my pup and took the camera with me. What had been nice spring weather was a distant memory from the frosty hand of winter I was seeing now.

There was even a few places along the river edge that a thin layer of ice had formed. They would be no hockey on this ice and try as I might there would be no good image either.

I turned my attention to the frosted plants and photographed a few, including a dandelion patch that was an icy yellow this day. Here is one of the better frosted plants.

We walked the levy and the trees slowly appeared out of the fog and then disappeared behind us. I made several attempts at getting the right mix of trees and fog. After a few tries I settled on this nice mix of road, frosty grass and foggy trees.

Of course within a day it was back to 60, and like that our fleeting winter was gone.
Labels: Fort Worth Texas Trinity River Winter