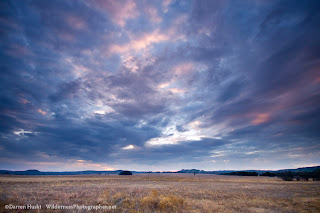 For my first Saturday of the new year a few buddies decided to drive south of Fort Worth to photograph the hills, towns and churches along the Bosque River country.
Because there was supposed to be a good chance of a meteor shower we decided to leave at 4AM so we could maybe catch some in the dark skies of the countryside. Four AM is not a big deal for me but I was working late on Friday and did not get out of the office until after midnight. So with less that three hours of sleep I even beat the alarm and was up and going.
We made the drive and found that the sky was mostly cloudy. So much for the falling stars. But we were not be deterred so we hoped for a good sunrise. The clouds were moving fast and thick enough to defeat the huge sunrise but the color we got was subtle and very nice. I gave up on thoughts of a falling star and began to think a big sky.
With the widest 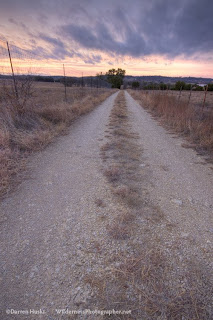 lens I had I began to frame up the grassy hills and the sweeping clouds of the sky overhead. I added a 2 stop ND grad to help bring in more detail to the grass.
The sky began to clear the clouds were fading fast. I saw a road leading off into some colorful sky and set up another image. A road has great potential for an image. Having a great sky and clouds only makes it better.
We also photographed an old church. Again the sky made the image. With in a short while after that the day was full on the the sky was clear. That was ok, I already had the good stuff when we had the big cloudy sky.
I may have left the house for the stars but I'll take a cloudy day any day with a camera.
Labels: Bosque Sunrise Texas