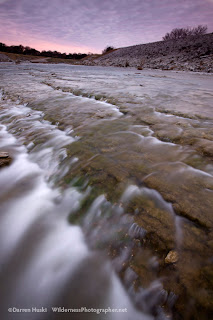 Winter Solstice has arrived. The longest night of the year. It is an occasion that has become somewhat of a tradition to be on the river to see the sunset on the shortest day of the year. See my Traveling Camera Blog for last year http://thetravelingcamera.blogspot.com/search/label/Solstice .
Much like last year it was a cloudy afternoon. The temps were falling fast and it was in the 40's when I waded into the river. I photographed the clouds and the rock ledges in the river. I was hoping for a fireball sunset but much like a year ago it was just a touch of distant color on the horizon. I walked around on the rocks and over the ledges. I waded into a couple deeper pools. Luckily I have a pair of Wellies that reach to the knee allowing me to get out into the river in the cooler temps of winter.

I found some rock ledges that ran diagonal through the frame toward the touch of color in the sky. The hint was not much but I hoped it would pick up on the sensor.

As the sky got da 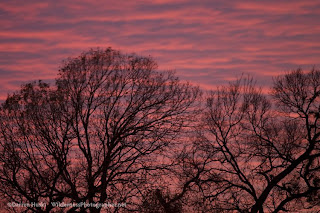 rker I left the river and went up on the bank where I could get a better view to the western horizon. There was just a touch of color. I switched over to the 200mm and isolated a few bare tree tops and made a few more images until the light was all but gone from the sunset.

With the lights of the city casting an orange glow on the clouds I walked up to one of my favorite trees (the same one I photographed last Winter Solstice). This time I went with the 10mm ultra wide and got right up underneath it.
The view looking up at the bare branches waving in the breeze with orange glow in the clouds made a cold wintery night image. The perfect way to make my first image of the winter season. 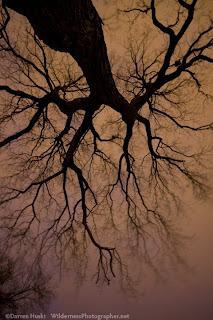 The winter is here.