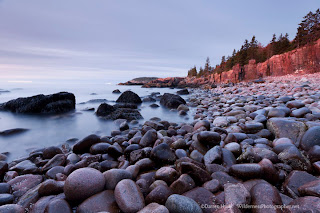 The rugged Maine coast is one of those places I have wanted to go to for a long time but had never had the chance to get to. Well, I finally made the time and just spent a week in the northeast.
Even better I got to see that rugged coast in fall color. Now you're talkin!
Started off with the coast of Mount Desert Island near the Otter Cliffs and the Thunder Hole. I spent two mornings here and I picked the right two days as both had just a few clouds on the eastern horizon to give just a hint of color to the sky.
As a photographer I always want clouds and in what seems the norm, I did not get many of them. But I was in Maine with fall color, so you work with what you have. 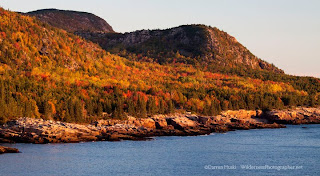 Even without the overcast I was wanting, I still managed to get some nice soft predawn light along the coast.
I was also able to get some early morning warm sunlight on the trees and coast. The fact that the color goes almost to the ocean's edge was something I had not really expected but was pleased to find.
I also found that even with all the fall color that even black and white had a place. You can see the image I got of the rocky beach but I'll post a few more next week of the trees in black and white as even with all this color, I still found some great monochrome scenes.