Snow in the Sierra Madre

I awoke to snow falling in the mountains. What had been a mostly clear afternoon had gotten thick clouds in the evening and that heavy overcast was now snowing!

By all means it was time to get further up the mountain.

I had passed some locations that I thought would be perfect with snow falling. Along the way the snow kept getting thicker and heavier the further up the mountain I went. 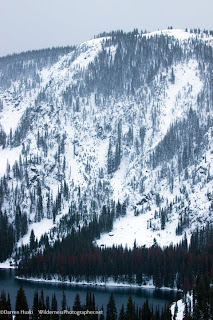 I made it to an overlook with a lake in the predawn dark. There were no stars and only snow billowing in. It was very quiet and the view was spectacular.

When the light came up I was able to make some images that captured the cold and the snow. See the second image.
At the same time I noticed that the snow was getting thicker and I still had to cross Battle Pass. Discretion is sometimes the better part of valor, so I decided to get over the pass before they closed it. Especially since they had closed the Snowy Range just a few days before.

When I crossed the pass the snow was flying in sideways and it was windy. I tried to get out of the vehicle to make a few images but it was pretty much impossible from the wind and blowing snow.

The top image is from below the pass where the snow was still in a moderate wind, but you can get the idea.

Finally the last image shows the road and how quick the snow was piling up. I just might have been the last person across Battle Pass this year. 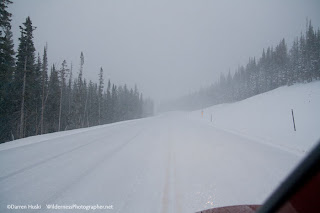 Like I said in my last post, I cannot recall seeing many, if any, images of the Sierra Madre. I think it gets overshadowed by Colorado to the south and by Yellowstone in Wyoming. And that is fine with me! This way I can be one of the few people to seek it out.

No question, I am going back.

But you would not like it, so stay away :-)
Labels: Snow Winter Wyoming