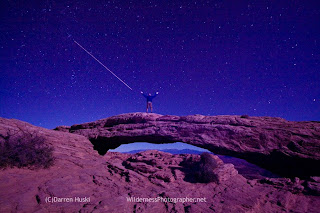 Back from a week in the red rock country around Moab, Utah. Got a chance to visit Canyonlands NP, Arches NP, Deadhorse Point SP, the Colorado River and the LaSal Mountains. I saw rain, snow, fall color, desert canyons, petroglyphs, and a lot of arches.

One of the things we spent time doing was photographing on clear nights. The countless stars were great to view and capture as an image. Also did some light painting of various formations.
This first image was a favorite. I am standing on Mesa Arch in Canyonlands at night. The image is about a minute long so I had to stand still for a minute on top of the arch. I might also add that it is 1500' straight down about 2' on either side from where I am standing. Anyway, got lucky and picked up a shooting star during the image giving it a whole new impact. I felt like Mickey as the sorcerers apprentice. 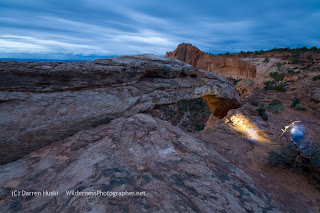 Another image shows the same arch closer to sunrise as the crowd begins to gather. I got there about 4:45am and had it all to myself for a couple of hours. By sunrise 40 people were jockeying for position.
Finally an image from Arches. I found this crack on a trip here five years ago and have been wanting to get a great image from it with the towers beyond. I tried in the daytime but could not capture anything other than ordinary. On my last morning in the park I got there at 5:30am and went to painting it with light. Viola- the forge of Odin. 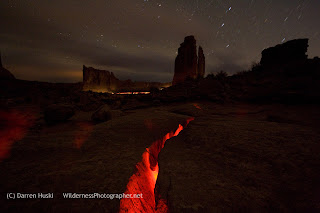 The light painting added a whole new dimension to the image making process. It was fun, different, and sometimes just luck but it made for some great photographs.
See more in the Utah section of my galleries.
Labels: Light Painting Night Utah