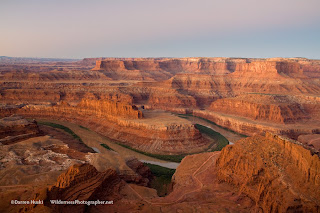 The red rock country is amazing. The sights, the rocks, the cliffs and arches are all fantastic features to visit, explore, and photograph
As a photographer I always hope to be there to witness a sky filled with clouds and spectacular sunsets over this rugged landscape. I saw some of that, but I also saw several days of bluebird cloudless sky (the norm here). You might think that clear sky can make photography bad. Well sometimes it can. It was tough getting an image at 2pm. But the first and last few minutes of the day had some great warm direct light that lit the rocks up.

But there was something else. Before sunrise and after sunset there was the glow.

It takes a few minutes after sunset but as the sky gets yellower in the west the warm reddish glow flows across the land. On those clear days it was by far the best light. For a few minutes early and late the rocks are bathed in color and soft light. The shadows almost do not exist and the scene just glows. 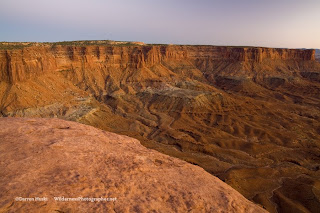 These images show some of that. An early day at Dead Horse Point. I got there in the dark and I stayed through the sunrise, but it was those very early glowing images that looked the best. It was a place and time that Velvia was made for. The 4x5 chromes I made here dripped with color from the glow.

An afternoon at Green River Overlook on a cloudless day was ok, but the glow after sunset was WOW. The colors and light were much better with the glow than the last light of day.

On another afternoon I was photographing in Arches and there must have been 20 photographers nearby. They all left right at sunset and I watched the glow alone and made the best images of the day. 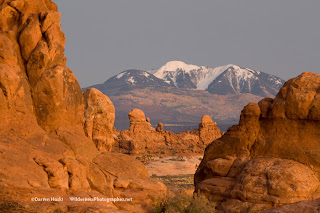 The glow can be everything on a clear day.
Don't miss it.
Labels: Red Rock Country Utah