Skip to main content
Labels
Posted by Darren May 31, 2018 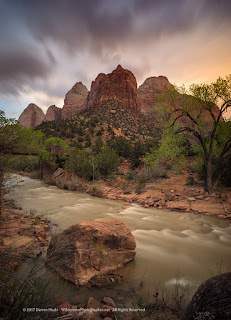 I visited Zion in late March as the fourth stop on a week in the southwest.  After cold at the Grand Canyon, mild and windy at Page and then cold and snow at Bryce, we arrived in Zion to find the trees budding and green popping out.  We had arrived in spring.

Zion Canyon is somewhat of a dividing line between the higher country to the north and east and the lower desert to the southwest.  I was not sure what to expect for weather because of this.  It could be warm and it could snow.

One thing I always want to do in Zion is wade the Narrows.  I have done this hike several times and I call it one of the ten best in the entire NPS.  Zion also has the Angels Landing hike which is also one of the ten best, making it a very unique park. 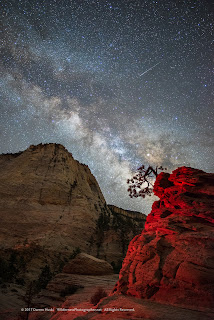 Unfortunately, the river was running high and fast from spring snow melt and the Narrows was closed.That had been the same conditions I had found in May the prior year, so I was a little disappointed.  However, Zion has so many sights that I had no problem finding images for the three nights I was there.

Since the trip was planned for the new moon, I went out early a couple of mornings to photograph the Milky Way.  It is hard to see it from deep in the canyon this early in the year but on the east side, I was able to see it clearly and photograph it over the slickrock country.  The dark skies of Utah and the great landscape make it a favorite spot to see and photograph our galaxy in the night sky. 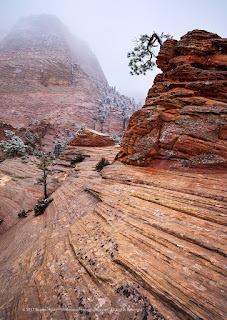 After another day of hiking the weather clouded up and it started to rain.  I woke up early to rain and fog.  I took the first shuttle into the canyon and saw the rain was falling as snow in the higher canyon country.  After photographing the cliff walls in the fog, I made my way out of the canyon and the drove up to the upper east side to see the snow falling on the slickrock.

While this was not a full on blizzard it was still super neat to see, just fleeting.  As often happens in the desert, snow falls over night and is melted away by afternoon.  One of the first places I went in the snow is the same rock formations I had photographed the prior morning with the Milky Way.  Quite the change in 24 hours-  clear dark night sky to snow and fog.  I could not believe my luck!

I also knew I had a short window so I worked with what I had for several hours staying out through lunch until the snow was melted.  Then quite content and hungry, I made my way back to Springdale and a plate of tamales at Oscar's. 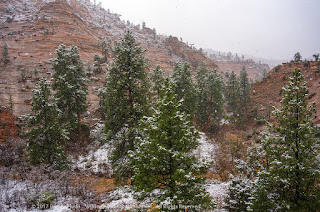 The few days I had in Zion were fantastic.  I got several great images and I knew I would have to return in the winter months sometime.
Labels: Milky Way Utah Zion