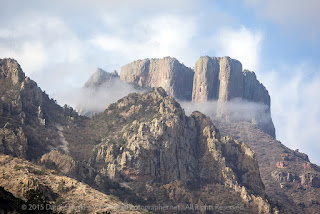 The center of Big Bend National Park is the Chisos Mountains.  They sit smack dab in the middle of the park and are the only mountain range contained entirely in any national park.

Chisos roughly translates to Ghost Mountains and the range lives up to it.  Since they rise out of the desert lowlands to heights approaching 8000' they are an island of a cooler and wetter climate than the surrounding desert.

They also can create their own weather.  Clouds often form along the peaks and ridges of the range.  Wind often kicks up sand and dust giving them a ghostly appearance.  Fog can even form in the winter months. 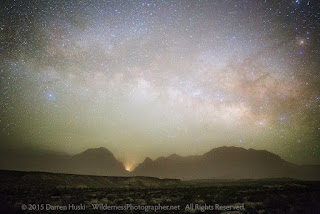 All of those things can lead to some great images.

I turn my cameras to the Chisos on a regular basis on my trips to Big Bend.  This trip was no exception.

I had camped over near Rattlesnake Mountain with the hopes of capturing the Chisos and the rising Milky Way.  The campsite is open desert but has a good view to the west.  After a nice still night I woke up to calm and clear.  I broke camp and had a ten minute drive to my chosen spot.  As I pulled out of camp at 3:30am the wind hit like a wall.  By the time I got to my spot in was blowing at 30-40mph.  The Chisos already were already disappearing into the dust. 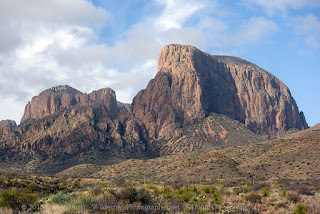 I could barely make out the Milky Way.  I set up the camera and made a few images.  The lights from the lodge up in the Basin made an eerie site as it shined out of the dusty sky.

The wind was so strong I decided to forego setting up two cameras and just had one.

I made a few images and decided the dust was too much for the distant image.  I decided to drive up into the Basin and see what I could get.  It was still windy but the dust was not as bad.

I got a few images.

The next day we returned to the Chisos right after sunrise and found clouds moving among the peaks and I was able to grab a few more images of the clouds and peaks. 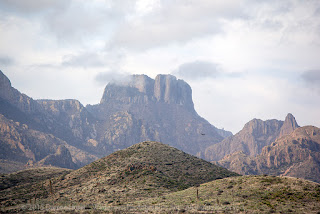 I left the mountains behind and walked away with a few more nice images of the ghostly qualities of the Chisos.