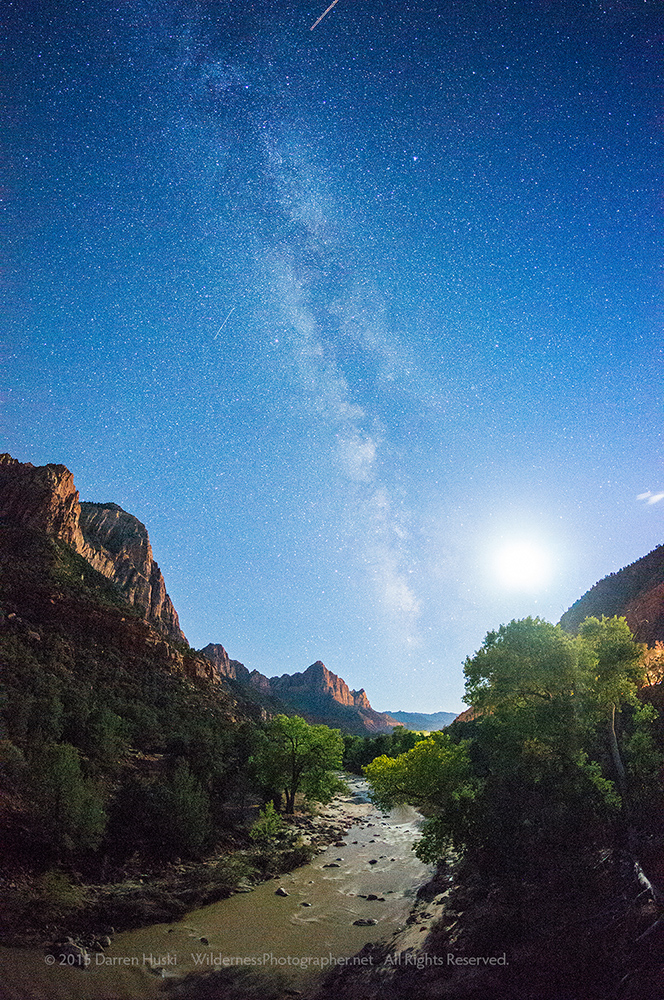 My Zion trip was planned around when we could get away and not around the new moon.  However, that did not deter me from being interested in attempting some night images.  In late September the Milky way is high in the southern facing sky when it gets dark.  In Zion the famous view off the bridge toward the Watchman faces south.  I was hoping to put the two together and get a nice image of the Milky Way over the river and the Watchman.

The sky was fairly clear but the moon was also in the southern sky.  It was around half full and it was bright.  It was not the most ideal conditions for a good nightscape.  Since those were the conditions, I decided to work with them and see what I could get.  I set up both my Canon 5D2 with the 14mm Bower (Samyang) lens and the NEX6 with the Rokinon (samyang) fisheye lens. 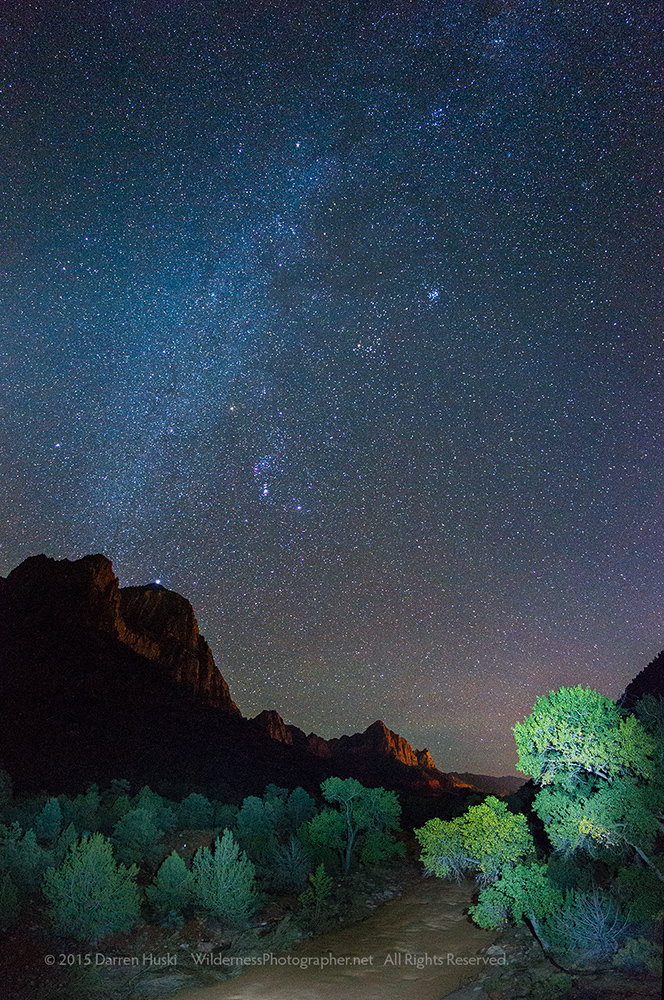 Since the Watchman shot is taken standing on a bridge, I knew I would have to be extra careful in the dark standing there as traffic goes past you literally less than two feet from you.  Luckily the road quiets down to only an occasional car after 9pm.  I had my headlamp and it has blinking mode which I always use to alert cars to where I am. Since you want it dark when photographing the Milky Way, I had all lights off when photographing and was good at both timing my images and knowing well ahead of time when cars were approaching.

I made a few images of the view.  The one nice thing about the moon being there was how it lit the scene.  Mountains and trees that normally would have been dark were now well lit.  Of course, the moon was in the scene too.  Work with what you have and the shot was alright. 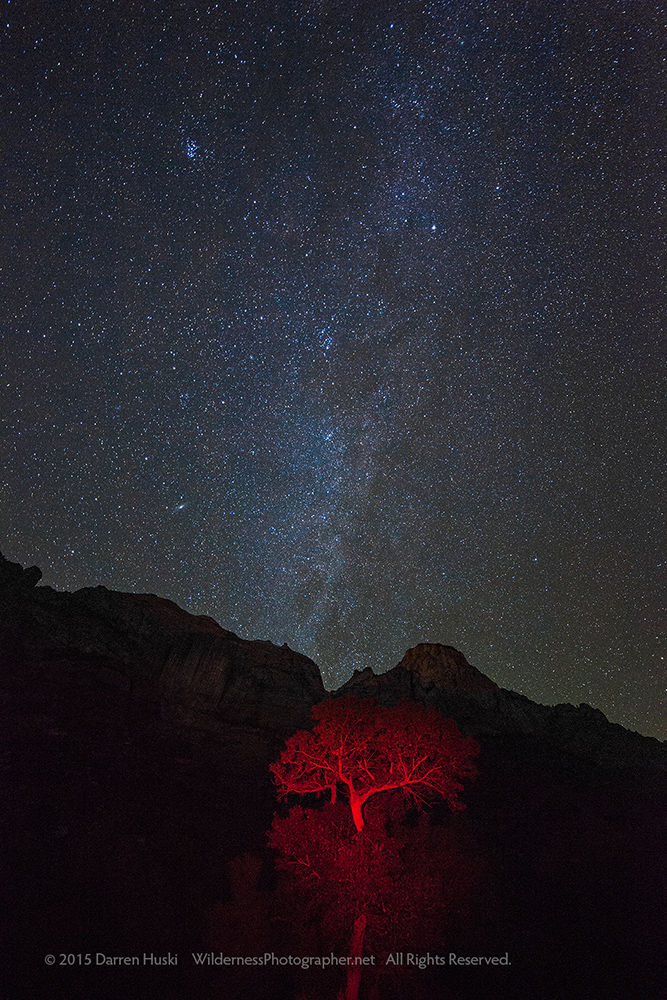 The next morning I was up and out early and although the best part of the Milky Way-the Galactic Core- was not visible one of the outer spiral arms was.  It is not as bright as the core but since the moon had set it was much darker sky.

I returned to the bridge and did another image of the Watchman.  Now only the Watchman is lit by the lights of the village of Springdale, the rest of the scene is dark. 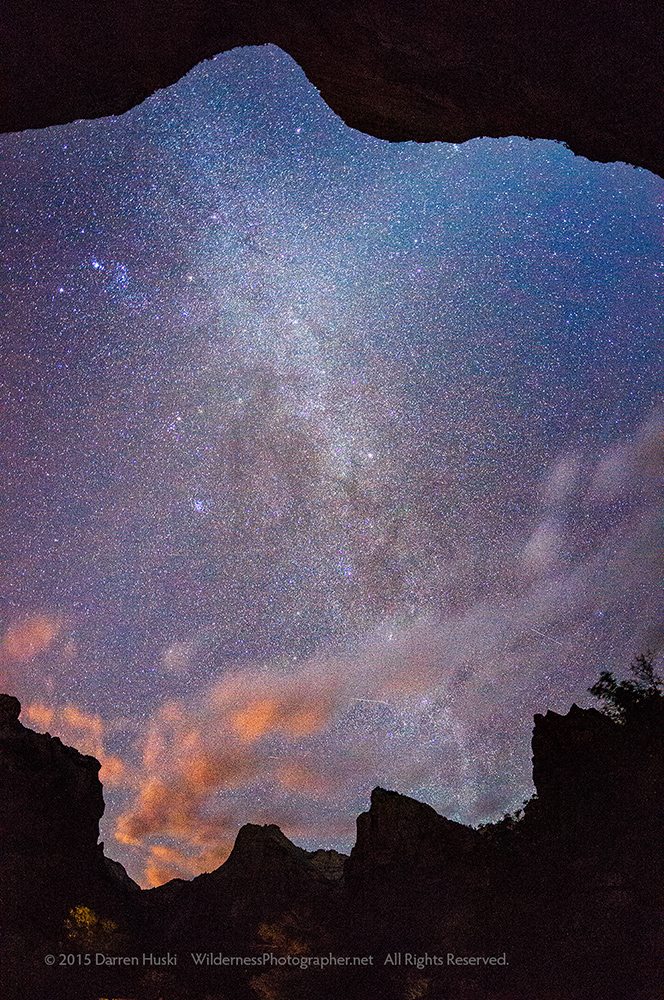 The view across the bridge to the north also had a view of a spiral arm of the galaxy and so I set up on that side for a few images.  The sky was dark and the canyon walls were dark too.  Since I wanted to pick up some level of detail I used the red LED of my headlamp to get just a little bit of light on a nearby tree to add something to the bottom of the image.

Finally, on my last day in the park I walked up the road to Court of the Patriarchs to try one last image.  I was hoping to get a shot with the well defined peaks in the court with the night sky above it.  Here I went to my fisheye lens on the NEX6 and was able to make an image getting both sides of the canyon walls with the spiral arm stretched across it.

Add in a little light from St. George bouncing off some clouds and I got an image I was really happy to get.

You can see more of these night images in my galleries on my website: