Storm on the Lost Mesa 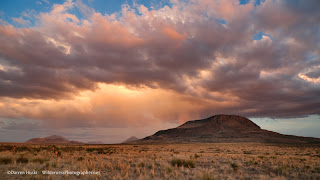 A thunderstorm breaking up at sunset on the Lost Mesa.


The day had started clear. A few puffy clouds started to form in mid morning. The clouds built up. The sky turned dark and rained in the afternoon. Late in the day a few storms were rolling across the mesa. At sunset, this thunderstorm was moving toward me it was also breaking up.
I could see rain falling on mountains that were only a few miles away. A rainbow appeared. I saw a single bolt of lightening. The clouds were racing toward me and breaking up at the same time.
The sun continued to set behind me. The light got better. The rain never made it to me.
I photographed until the light was gone from the sky. Then waited for the stars.
This image was from the height of the magical light. Sometimes you just get lucky and get to see days like this.
Labels: Lost Mesa New Mexico Open Range Otero Mesa; Panasonic LX-3