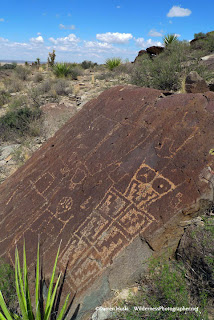 Tlaloc Man is a petroglyph found in rare locations in the southwest. He is thought to be associated with rain and storms. In the southwest, that is a good thing. It is also a glyph I was always fascinated with ever seeing an image of one from Hueco Tanks State Park near El Paso.

Except I had only seen it in books, never anyplace I went. I've been to Hueco Tanks several times and saw rock art but since I was usually there as a climber finding Tlaloc took a backseat to the days climb.

So imagine my surprise last year when I not only randomly walking found one almost 4 foot tall! The Lost Mesa is a magical place and there is rock art to be found. I set out in search of it and wandered the sides of a mountain. At first I saw nothing. Then a solitary glyph. Suddenly walking around a rock I see a slab with a 4 foot tall Tlaloc.

Tlaloc is usually described and found as a trapezoidal shaped glyph with geometric designs and goggle eyes. This was it. Not just a Tlaloc, but a big one! 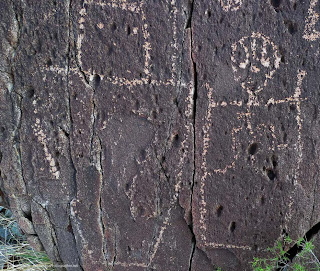 He was not alone either. Carved on the same slab were several trapezoidal outlines. Proto-Tlaloc men? A sketch pad for the final masterpiece? I do not know. Four such shapes were on the same slab face. A tiny Tlaloc was on the side of the rock.

After returning to the mesa this late summer, I found even more. Several examples of the Tlaloc were spread across the mountain. Most were small or "proto" outlines, none were as good as the first one. One looked like the body but the head was never finished.

A collection to say the least.


Here are a few to sample them.

The top image is the big one. This petroglyph is almost four feet tall and stares out at the sky. Four proto-Tlaloc men can be seen beyond on the slab. Two of those are detailed in the second image. The outline is there but the details were never fully finished. Both of these are also in the three fo 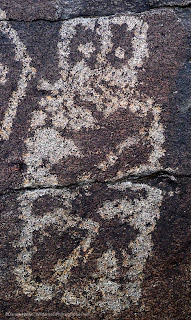 
Finally, the third image is of one of the tiny ones. This one is only a few inches tall, yet the trapezoidal shape and goggle eyes make it unmistakably a Tlaloc.

Great glyph at a great location. Yet another area that deserves more visits.