Skip to main content
Labels
Posted by Darren Huski May 24, 2009 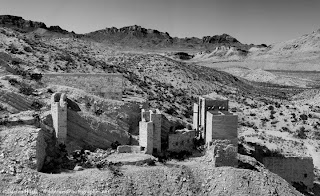 The Mariscal Mine is an old cinnabar mine that operated in the early part of the 20th century.

Today the ruins of the mine are still somewhat standing in Big Bend National Park.

I had been to the mine several times when out driving on the backroads of Big Bend but it was always in the middle of the day. this last trip I decided to camp at the nearby Fresno backroad site and photograph the mine.

The first thing one will notice is that the mine is on a steep side of the mountain and is actually on several "levels". That makes it neat to explore and to get interesting camera angles. It also made it a little difficult to paint with light at night as it was difficult to get large views one could easily paint. 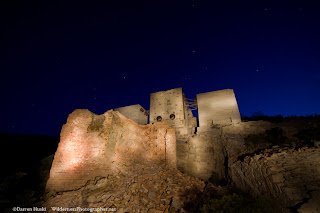 I spent an afternoon looking for the best potential angles to light paint from. After watching the clear sky fade to night (cannot really call that a sunset), I set up a few locations to light paint. After working several smaller scenes I went to the base of the structure and used a spotlight to paint the front as the sky darkened into the black of a moonless night.


After being at the mine I made my way down to some of the mine houses and painted them with light too.
Finally after several hours I called it a night about 1130pm.
Back up at 4am to work with the almost full moon that had risen in the night, I returned to the mine houses which with their windows, doors, and roofless nature, worked well for what I wanted to do.
I enjoyed the images I was making I did not make it back to the mine itself until almost sunrise and went for a different view by climbing the ridge next to the mine to be able to see over it toward the Chisos. 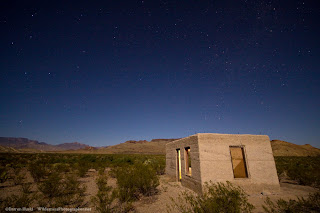 Two thumbs up as a location. Well worth the drive (two hours on rough road from pavement) and staying the night really made it a photographers place.
See more images in my galleries
http://www.wildernessphotographer.net/gallery/8013701_VD8SR#521427663_dtyTT
Labels: Big Bend Night Texas