Return to the Lost Mesa 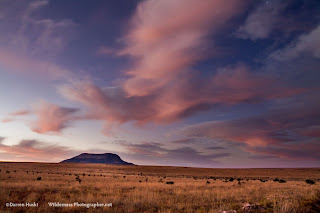 I returned to the Lost Mesa in the first part of November. I was looking to tie in a visit on the open range with the right time of year for fall color in the nearby Guadalupe Mountains.

I arrived on the mesa on a spectacular afternoon. The sky was blue and a few white clouds sailed across it. The mesa has seen some nice summer rains but now was a fairly dry and dusty time. I set about exploring knowing that I had three days to see things.

After the long drive I decided to start with the area closest to the Horned Mountains. I got in a nice afternoon hike and really started to get a better feel for the big open empty quality of the place. A nice sunset turned into evening and then a star filled sky. The moon was barley more than a quarter but with the area being so dark it seemed much brighter.

I was up and photographing early the next day. At first it was stars but as dawn moved closer I began to see some clouds were slowly drifting across the sky. I knew this had some great potential for some great images. 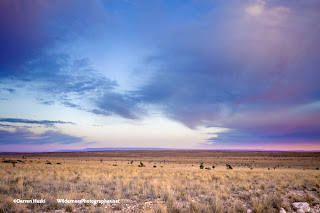 The dawn arrived full on with soft glow, orange sky, and glorious clouds. It was perfect.

Actually it was almost too prefect. There were sights all around. There were glowing clouds in every direction too. I could not move fast enough. I had cameras pointed in three directions trying to capture the moment. The top image was pretty close to it. See the best one in my gallery Lost Mesa II where a longer exposure gave movement to the clouds and Orion still hunts in the sky.

As the orange light faded in the clouds and the daylight grew I began to work farther images such as the view north across miles of open range toward the distant Sacramento Mountains (image 2). 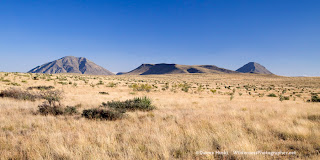 Later that day after the clouds moved away east the sky took on a blue so clear and crisp you could almost taste it.

I hiked for rock art, drove through a yucca forest, and explored the Horned Mountains. Th view here is in the afternoon. From left to right we have Wind Mountain, Flat Top Mountain, and San Antonio Mountain (which is actually in Texas).

I also saw pronghorn, although they usually saw me first and were usually long gone before I could grab the camera. But this one time they stood and watched me for a while and I was able to get this image. They are still aways out there and since my lenses top out at 200mm they are quite small in the frame (glad I had a few extra megapixels to work worth) but this is a maxed out closeup.

I was again struck by the big quality of the open range here. How big is it? At 1.2 million acres it is almost 50% bigger than Big Bend National Park. And I had it all to myself. It was me, the sky, and the open range.

This is a big, empty, lonely land.