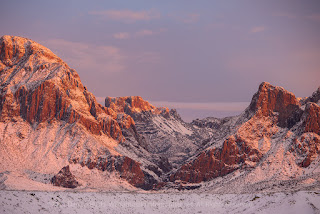 At the end of 2020 I spent some time out in Big Bend National Park. I have been on several trips to the park in December and every time is different in weather and conditions.
It could be 80F degrees. It could be 5F degrees and snow. One really never knows. It means you have to be prepared for anything regardless what the weatherman says.
When I left for the park the call was for warm weather, maybe a few clouds and a full moon. We had several days of warm weather but at the end of the week a front moved much farther south than expected. I went to bed one night under thick overcast and rainy skies with the temp falling rapidly. I wondered if I would wake up to snow.......
On December 31st, the last day of the year I was out the tent by 0500 to only see rain. It was just too warm on the desert floor for snow. I began a drive up towards the Chisos. As I got to higher elevation I encounterd snow flakes, then snow sticking and finally up by the Chisos almost a foot of fresh fallen snow. I was the first one up the road. 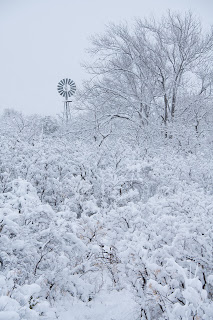 I waited for first light beneath the Window and took in a winter wonderland. Snow covered everything! I have seen snow in Big Bend....but never this much snow. This was one of those magical days I always hope for as a photographer!
I went for a walk along a trail into the old Sam Nail Ranch site and say trees and cactus draped in many inches of snow. There was so much white it was hard to find a photograph. I wandered among the trees trying to find shapes amongst the snow. After exhausting the area, I drove further and stopped again and again and again. The conditions were epic but also fleeting. I knew it could easily be all melted by mid day.
Luckily the snow lightly fell and the sky stayed overcast. I drove around to the other side of the Chisos and saw low moving clouds surround the peaks and stopped to make images.
Back and forth I drove always looking for where I might find something. The Basin itself was closed as the conditions were too poor on the narrow road to get in our out. Some lucky folks were up there...... I stayed in the desert grasslands looking up at the peaks. 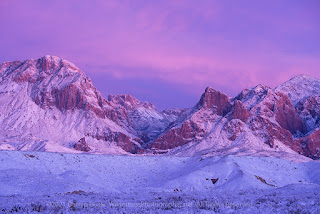 Late in the day I noticed a small gap in the clouds in the western sky. I instantly made my way over to the west side of the Chisos and got a spot I hoped my work for a sunset. The idea being that if the gap staye din the clouds, the sun would pop out and bath the mountains in golden light close to sunset.
I waited. And I waited. Then the light began to happen.
The gap was still there!
Over the next two hours I witnessed the best light I saw in all of 2020. The last day of the year and last sunset of the year was the best one of the year. The light began to shine on the western wall of the Chisos. Becoming more bright and golden until the peaks were all aglow.
It was amazing.
The light lasted and lasted. I had three camera going to try to capture all of the light. As the sun set the clouds began to break up and the sky went pink and purple. 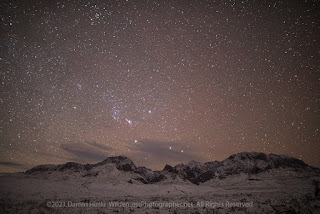 For the next hour the sky slowly cleared under an amazing afterglow. As the light finally faded to night I began to see the stars as saw Orion rising over the Chisos. It seems it was well into night before I was content to leave that spot.
I made my way back to camp happy and joyful to have had a most amazing new years eve.
Labels: Big Bend Texas Winter 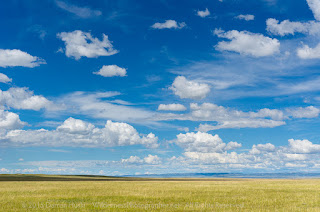 Where the Great Plains Meets the Rockies